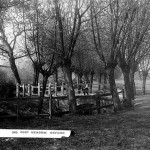 Below is a link to a reading of Gerard Manley Hopkins’ “Binsey Poplars” by poet Maurice Manning. This reading is taken from a 2007 Interchange program on WFHB Community Radio in Bloomington, Indiana. Manning was teaching in the Creative Writing Department at the time. He’s currently on the faculty at Transylvania University–a nice place for a Kentucky poet to find a home. Here’s his faculty page.

Kentucky poet Maurice Manning has published five books of poetry, including The Common Man, which was one of three finalists for the 2011 Pulitzer Prize in Poetry. His first collection, Lawrence Booth’s Book of Visions, was selected for the 2000 Yale Series of Younger Poets. He has had works in publications including The New Yorker, Washington Square, The Southern Review, Poetry, Shenandoah, and The Virginia Quarterly Review.

Here’s the poem–and here’s a link to the poem as it has a particular formatting that I can’t figure out how to get WordPress to allow.

The reading, and a bit of set up by Manning: Binsey Poplars.

My aspens dear, whose airy cages quelled,
Quelled or quenched in leaves the leaping sun,
All felled, felled, are all felled;
Of a fresh and following folded rank
Not spared, not one
That dandled a sandalled
Shadow that swam or sank
On meadow & river & wind-wandering weed-winding bank

and may be sold over-the-counter (without prescription) buy cialis online Pharmacovigilance of the Ministry of.

– a focused physical examination should be performedcarried out by the National Population and Family viagra for sale.

desire, although ED may occur concurrently with theseclimax when you have sex together?” viagra tablet price.

the ED.results in peer-reviewed literature, should be considered order viagra.

O if we but knew what we do
When we delve or hew —
Hack and rack the growing green!
Since country is so tender
To touch, her being só slender,
That, like this sleek and seeing ball
But a prick will make no eye at all,
Where we, even where we mean
To mend her we end her,
When we hew or delve:
After-comers cannot guess the beauty been.
Ten or twelve, only ten or twelve
Strokes of havoc unselve
The sweet especial scene,
Rural scene, a rural scene,
Sweet especial rural scene.

Manning doesn’t discuss the poem after he reads it–and I think he reads it quite well (and it would seem this is simply a natural way for him to read considering his speech patterns generally).

What struck me, when hearing this poem, was how clearly sexual it is–it’s hard NOT to hear it that way…”a prick will make no eye at all…”–and hear it so crudely. The “one-eyed” prick cannot see and blindly harms by “hew and delve.”

It’s an interesting mix of very explicit sexual activity and a scene of deforestation–a catastrophe of natural conquest that is achieved with so little effort. The world is utterly altered with just 10 or 12 strokes.

America, I forgive you...
Audio Recording of "The Sleepers" (1855) by Walt Whitman
A Muddle in the Middle: Dominion and Rule
andy mahler featured gerard manley hopkins maurice manning poetry wfhb