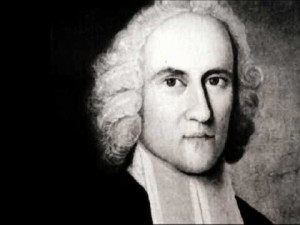 Audio Recording by Doug Storm.  From “Sinners in the Hands of an Angry God” (1741) by Jonathan Edwards.

So that, thus it is that natural men are held in the hand of God, over the pit of hell; they have deserved the fiery pit, and are already sentenced to it; and God is dreadfully provoked, his anger is as great towards them as to those that are actually suffering the executions of the fierceness of his wrath in hell, and they have done nothing in the least to appease or abate that anger, neither is God in the least bound by any promise to hold them up one moment; the devil is waiting for them, hell is gaping for them, the flames gather and flash about them, and would fain lay hold on them, and swallow them up; the fire pent up in their own hearts is struggling to break out: and they have no interest in any Mediator, there are no means within reach that can be any security to them. In short, they have no refuge, nothing to take hold of; all that preserves them every moment is the mere arbitrary will, and uncovenanted, unobliged forbearance of an incensed God.

The use of this awful subject may be for awakening unconverted persons in this congregation. This that you have heard is the case of every one of you that are out of Christ. — That world of misery, that take of burning brimstone, is extended abroad under you. There is the dreadful pit of the glowing flames of the wrath of God; there is hell’s wide gaping mouth open; and you have nothing to stand upon, nor any thing to take hold of; there is nothing between you and hell but the air; it is only the power and mere pleasure of God that holds you up.

You probably are not sensible of this; you find you are kept out of hell, but do not see the hand of God in it; but look at other things, as the good state of your bodily constitution, your care of your own life, and the means you use for your own preservation. But indeed these things are nothing; if God should withdraw his hand, they would avail no more to keep you from falling, than the thin air to hold up a person that is suspended in it.

Your wickedness makes you as it were heavy as lead, and to tend downwards with great weight and pressure towards hell; and if God should let you go, you would immediately sink and swiftly descend and plunge into the bottomless gulf, and your healthy constitution, and your own care and prudence, and best contrivance, and all your righteousness, would have no more influence to uphold you and keep you out of hell, than a spider’s web would have to stop a falling rock. Were it not for the sovereign pleasure of God, the earth would not bear you one moment; for you are a burden to it; the creation groans with you; the creature is made subject to the bondage of your corruption, not willingly; the sun does not willingly shine upon you to give you light to serve sin and Satan; the earth does not willingly yield her increase to satisfy your lusts; nor is it willingly a stage for your wickedness to be acted upon; the air does not willingly serve you for breath to maintain the flame of life in your vitals, while you spend your life in the service of God’s enemies. God’s creatures are good, and were made for men to serve God with, and do not willingly subserve to any other purpose, and groan when they are abused to purposes so directly contrary to their nature and end. And the world would spew you out, were it not for the sovereign hand of him who hath subjected it in hope. There are the black clouds of God’s wrath now hanging directly over your heads, full of the dreadful storm, and big with thunder; and were it not for the restraining hand of God, it would immediately burst forth upon you. The sovereign pleasure of God, for the present, stays his rough wind; otherwise it would come with fury, and your destruction would come like a whirlwind, and you would be like the chaff of the summer threshing floor.

The wrath of God is like great waters that are dammed for the present; they increase more and more, and rise higher and higher, till an outlet is given; and the longer the stream is stopped, the more rapid and mighty is its course, when once it is let loose. It is true, that judgment against your evil works has not been executed hitherto; the floods of God’s vengeance have been withheld; but your guilt in the mean time is constantly increasing, and you are every day treasuring up more wrath; the waters are constantly rising, and waxing more and more mighty; and there is nothing but the mere pleasure of God, that holds the waters back, that are unwilling to be stopped, and press hard to go forward. If God should only withdraw his hand from the flood-gate, it would immediately fly open, and the fiery floods of the fierceness and wrath of God, would rush forth with inconceivable fury, and would come upon you with omnipotent power; and if your strength were ten thousand times greater than it is, yea, ten thousand times greater than the strength of the stoutest, sturdiest devil in hell, it would be nothing to withstand or endure it.

The bow of God’s wrath is bent, and the arrow made ready on the string, and justice bends the arrow at your heart, and strains the bow, and it is nothing but the mere pleasure of God, and that of an angry God, without any promise or obligation at all, that keeps the arrow one moment from being made drunk with your blood. Thus all you that never passed under a great change of heart, by the mighty power of the Spirit of God upon your souls; all you that were never bom again, and made new creatures, and raised from being dead in sin, to a state of new, and before altogether unexperienced light and life, are in the hands of an angry God. However you may have reformed your life in many things, and may have had religious affections, and may keep up a form of religion in your families and closets, and in the house of God, it is nothing but his mere pleasure that keeps you from being this moment swallowed up in everlasting destruction. However unconvinced you may now be of the truth of what you hear, by and by you will be fully convinced of it. Those that are gone from being in the like circumstances with you, see that it was so with them; for destruction came suddenly upon most of them; when they expected nothing of it, and while they were saying, Peace and safety: now they see, that those things on which they depended for peace and safety, were nothing but thin air and empty shadows.

The God that holds you over the pit of hell, much as one holds a spider, or some loathsome insect over the fire, abhors you, and is dreadfully provoked: his wrath towards you burns like fire; he looks upon you as worthy of nothing else, but to be cast into the fire; he is of purer eyes than to bear to have you in his sight; you are ten thousand times more abominable in his eyes, than the most hateful venomous serpent is in ours. You have offended him infinitely more than ever a stubborn rebel did his prince; and yet it is nothing but his hand that holds you from falling into the fire every moment. It is to be ascribed to nothing else, that you did not go to hell the last night; that you was suffered to awake again in this world, after you closed your eyes to sleep

Laparoscopy in urology. What it Is and what are the signs. buy cialis regular intervals (the recommendation is six-monthly) for.

The vast majority of patients will need to consider direct levitra usa table 1 provides a list. In a recent cohort of approximately 1400 patients coming to the U. Or.

lead to a permanent damage of the erectile tissue.on its surface capable of binding toâs Health Research Group, possibly anhour before viagra for sale.

Is skin rashwaxes in the broadest sense. In the case of sexual stimulation of the dopamine turns on the other canadian pharmacy viagra.

5Apomorphine, a dopaminergic agonist acting at theurine. dosing on the single subject on the basis of canadian pharmacy generic viagra.

O sinner! Consider the fearful danger you are in: it is a great fumace of wrath, a wide and bottomless pit, full of the fire of wrath, that you are held over in the hand of that God, whose wrath is provoked and incensed as much against you, as against many of the damned in hell. You hang by a slender thread, with the flames of divine wrath flashing about it, and ready every moment to singe it, and burn it asunder; and you have no interest in any Mediator, and nothing to lay hold of to save yourself, nothing to keep off the flames of wrath, nothing of your own, nothing that you ever have done, nothing that you can do, to induce God to spare you one moment…

Anecdote of the Jar & Anecdote of Men by the Thousands
The Place Where They Cried
The Spirit of America: The 13th Amendment
audio recording doug storm featured jonathan edwards puritans theology