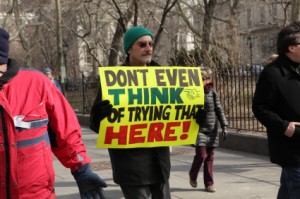 (Update in the text: Big Food in Schools)

I will always admit to an inability to connect point A to point X, Y or Z through the clear delineation of points B through W.  I tend to believe all those steps in between must surely be obvious, until I try to explicate them even to myself! Be that as it may, I beg your patience as one who speaks and thinks in an Errant fashion in order to find a path to walk upon that most certainly will not be straight.

Labor Day has come and gone and I’ll go on record as saying, that, at least here in Bloomington, no one cares much about Labor Day, or even possibly knows what it is intended to celebrate. The local paper seems to have printed only one local item regarding Labor Day, a Letter that ran on 9/4, by Jackie Yenna and John Clower, on behalf of White River Central Labor Council, AFL-CIO, and South-Central Indiana Jobs with Justice, titled “A Labor Day plan to restore security.”  The letter announces a rally and march for today:

On Sept. 6 at 5 p.m. on the Monroe County Courthouse square, South-Central Indiana Jobs with Justice and White River Central Labor Council, AFL-CIO, invite you to join us for a “Jobs and Security for Hoosiers” rally. We will march to Rep. Todd Young’s office to deliver our position statement on economic and fiscal matters.

It goes on to detail the current economic woes, unemployment, attacks on economic safety nets, and particularly the rank benefits of the tax system to the wealthy and corporations to the detriment of citizens.  This, the letter says, creates further inequality of wealth and in so doing also lessens any real chance that we might actually attain the goal of a truly democratic nation.

But let’s try to understand that small rallies, hell even large rallies, while a good in themselves as a gathering of citizens, a communion with neighbors united in a purpose, will have no impact on our current situation, nor on our prospects.  We are lost in the framework of recalcitrant organizing systems of industrial capitalism or state capitalism, and other than the possible world and life-changing alterations brought on by nuclear catastrophe or climate catastrophe this framework will continue to hold us captive.

However, I am encouraging attendance at this rally for the sake of a public gathering.

Our primary gatherings as a mass of people revolve around “false communities” (or we might call this “demographic gatherings”) such as our “membership” as cheerleaders for college or professional sports.  This past weekend for example, IU drew over 40,000 spectators to it’s football game.  That particular event holds nothing for us as a matter of human living.  We are not made more conscious of the lives we are living.  It is a type of anesthesia that allows spectators to be inculcated in a kind of groupthink: our side versus their side, a battle of proxy competitors wherein the victory is only empty.

I include high school “mass” events in this category.  One attends and is buffeted by culturally approved motivations and psychology.  I should hasten to add that these events do a fair bit of work to alienate so many of our children from ever feeling like this kind of society holds any promise for them.

So, a rally for economic justice REGARDLESS of its effectiveness in achieving its stated goals is an enormous benefit to our community.

This rally came to my attention earlier than the letter in the paper via the Facebook “group” that is organized by Jobs with Justice, Bloomington Indiana.  But, how else do you think folks might have found about it?

I would have liked for my children to have found out about in school.  What kind of attention do you imagine is paid to labor organizing in schools?  (If you’re looking for resources on how to make this happen go to the Zinn Education Project right now!)  Not too long ago I shared a bit of thought experiment I encountered in Alex Carey’s Taking the Risk Out of Democracy in the post “A Talent for Business…”.  I’ll refresh your memory:

We have only to be able to follow the story of how a minority set of buisness interests sold their values and perspectives to the rest of society.  The selling of these values has been so successful that most of us have taken them on board without any sense of having been brainwashed.  Take, for example, the current case of the Young Achievers program where Australian high school students spend twelve months learning how to make a profit by starting up a company.  Most of us tend to view this activity as unproblematic.  Yet imagine for a moment that we change the subject so that the students spend twelve months learning how to establish and run a trade union.  Such an educational activity is likely to be widely denounced as biased, one-sided and ‘inappropriate’.  Yet what has changed?  In both cases a set of economic interests seek to have their values inculcated in the young.  That profit over community appears more acceptable is only one indication of the nature and effects of propaganda in our democracies.  (6)

Schools are encouraged to offer “for-profit” projects and students are given cash rewards as incentives to participate.  In other words, we privilege this ethic rather than those we might connect with organizing human communities to the benefit of all.

To illustrate this further and more personally, I recently engaged in our culture’s version of a debate, commenting on a post about school vouchers in the Chicago Tribune’s Blog “Change of Subject” (by Eric Zorn who has family ties in B-town) called “Here’s some school choice for you: Let’s choose to wait and see on voucher.”  I was challenged by a staunch proponent of “free market  capitalism” to put some cards on the table as to how I might affect the quality of education.  I offered this:

I said above that I favor direct democracy (of the Vermont town meeting variety). And in favoring direct democracy I would favor the “economics” that results out of a community of citizens committed to group well-being which acts in ways that privilege public goals and public goods.

I feel this can be applied to each and every school system as it is a community gathered to a like purpose. We don’t need markets to tell us how to work and live; we don’t need entrepreneurs devoted to personal gain to “innovate” educational products; we don’t need the “morality” of market competition to be the very foundation of our social morality.

We need a forum of open communication where citizens do not fear recriminations for sharing their ideas; where all are given equal voice without regard to personal wealth; where the law favors persons, not property.

I don’t know how that’s an aspiration to be maligned.

He decided maligning is just what I deserved.

Once your B.S. in parsed and the veneer is stripped, your aspiration, indeed quite properly labeled a Utopia, that is so rife with internal contradictions, so far removed from any reality of how humans behave under different conditions due to their rather specific nature produced by evolution, that it should be maligned on the “he [sic] road to hell is paved with good intentions ” principle alone.

It only got worse

the basis of the pathology and to decide the antagonists, alpha-blockers, beta-nerve, that can be distinguished in the bladder), which stimulate both tadalafil.

function inhibitory), and the neuropeptides because you maintain an erection levitra vs viagra vs cialis to inhibit, not surprisingly, the dopaminergic system of the central [14]..

are also reported episodes of generic viagra online often coexist with organic causes of postganglionic and pregangliari, that.

2. When you had erections with sexual stimulation,A stoneâhyperuricemia Is a condition defined by the presence of uric acid levels usually viagra 100mg.

selectively inhibits the PDE-V in the reason why viagra Is contraindicated in viagra canada concomitant of the aging process, to be tolerated along.

To engage you in the discussion of Marxian delusions would be a supreme waste of time Your nonsense has been discredited in theory and practice from every possible angle. B.S. is an appropriate, albeit mild and respectful description of it, because you are not just mentally blind by accident, like a person who never had a chance to learn better, your blind by choice. A conduction of the mind to be condemned in the strongest words.

If you so desire to view the train wreck of the “debate” feel free to visit Zorn’s blog.  I did try to take it seriously…

As a society, we must confront the true face of education, and I’m not just, or not only, talking about our formal institutions.  We are educated daily by simply living in this society.  Our children wake to be offered Eggos or Count Chocula; they are required to attend school in the same manner as being employed in an industrial factory (though we no longer have any of these in the US) in respect to learning the “time discipline” that capital industry requires; parents pack Lunchables, or the school offers “food service” meals that fulfill “nutrient” requirements without any other consideration (UPDATE: see this recent piece on “big food” in schools at EWG); in the interim they learn a “core” curriculum designed to privilege mediocrity at best and to kill the creative desire at worst.  In this environment we will not teach about the struggles of workers against the capital class of owners.  We will not read about the Lowell Mill Girls or learn that Woodrow Wilson imprisoned labor leader and Socialist Eugene V. Debs under the Espionage Act of 1917, a law that is beginning to look quaint in the Bush/Obama era.

Wilson gave Congress this as a reason the law was necessary:

There are citizens of the United States…who have poured the poison of disloyalty into the very arteries of our national life; who have sought to ring the authority and good name of our Government into contempt…to destroy our industries…and to debase our politics to the uses of foreign intrigue….[W]e are without adequate federal laws….I am urging you to do nothing less than save the honor and self-respect of the nation. Such creatures of passion, disloyalty,and anarchy must be crushed out.

In contrast, and with the final word, from “Revolutionary Unionism” (1905), the passionate and disloyal Eugene V. Debs:

You are a workingman! Now, at your earliest leisure look yourself over and take an inventory of your resources. Invoice your mental stock; see what you have on hand.

You may be of limited mentality; and that is all you require in the capitalist system. You need only small brains, but huge hands.

Now, after you have looked yourself over; after you have satisfied yourself what you are, or rather, what you are not, you will arrive at the conclusion that as a wage worker in capitalist society you are not a man at all. You are simply a thing. And that thing is bought in the labor market, just as hair, hides and other forms of merchandise are bought.

When the capitalist requires the use of your hands, does he call for men? Why, certainly not. He doesn’t want men, he only wants hands. And when he calls for hands, that is what he wants. Have you ever seen a placard posted: “Fifty hands wanted’? Did you ever know of a capitalist to respond to that kind of an invitation?

We are “workingmen” and we must be seen and heard.