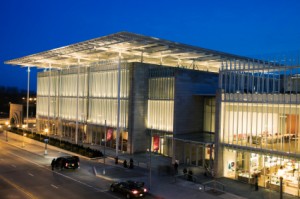 In our laundry room by the door to the garage, we have a wall calendar that lists important historical events for each date. The kids look at it every day–we talk about the events on the way to school and learn a little history.  I’ve always been a little bit of an amateur history buff, reading the little daily notice in the back pages of the Chicago Tribune that lists notable events for any given day.  It’s fascinating to see the unintended patterns of history that occur from time to time. Wars, alliances, persecutions, fashion…I have to disagree with The Split Enz who claim “History Never Repeats.” If you start to pay attention, the similarities stand out.

Our family visited Chicago a few weeks ago, and this idea was brought home to me in an unexpected way. At the Art Institute, one of our trip highlights, we were greeted by Jitish Kallat’s “Public Notice 3” as we went up the steps to the galleries.  It is not artwork in a traditional sense; Kallat’s work was inspired by a speech from the First World Parliament of Religions, which took place in Chicago itself on September 11, 1893.  This particular date and speech may not have initially had the same visceral resonance that I found in it as I was reading the speech in the wake of the events of 2001.  But as you will see when you start reading the text of the speech below, the material and subject matter have an uncanny relevance to September 11, 2001.

Public Notice #3’s initial effect on the observer was one of puzzlement–why are there words on the stairs?  The speech began at the bottom step and moved upwards, drawing my eyes and feet to follow it along.  Kallat took the text of the speech and used an LED display to present it on the risers of the Art Institute’s Grand Staircase.  The colors he chose for his work were the colors of the United States Department of Homeland Security’s alert system (the color choice gradually became more noticeable in its repetition).  As I read further, my curiosity was heightened–whose text is this?  Where did these words come from?  I reached the top steps where the text ended and found myself walking back down to read it again.  Is this art? Is this a new statement by the Art Institute? What am I looking at and reading, and why? Kallat accomplished the ultimate mission of an artist; he captured my interest and made me think critically about what I was seeing.  I wanted to know more, so down the steps I went, looking for more clues.

Around the corner from the staircase, I found what I was looking for, an informational display about the artist,  but more importantly the reference for the text I had just read. The date of the original speech was a slap in the face after reading the text itself, and this was definitely one of those unexpected historical resonances. I marveled at the astuteness of the display, though the information about the piece was a challenge to find; the display forces you to immerse yourself in the work itself before it divulges its critical information.

I have been thinking about this speech since the day I saw it on display on the Institute’s Grand Staircase, and was able to find some additional information about the artist, the speaker and the speech online. From The Art Institute of Chicago‘s website:

Overview: In the first major presentation in an American museum of Jitish Kallat’s work, the contemporary Indian artist has designed a site-specific installation that connects two key historical moments—the First World Parliament of Religions held on September 11, 1893, and the terrorist attacks at the World Trade Center and the Pentagon on that very date, 108 years later. The resulting work, Public Notice 3, creates a trenchant commentary on the evolution, or devolution, of religious tolerance across the 20th and 21st centuries. The basis for Kallat’s installation is a landmark speech delivered by Swami Vivekananda at the Parliament, which was held in conjunction with the World’s Columbian Exposition in Chicago in what is now the museum’s Fullerton Hall. The Parliament was the earliest attempt to create a global dialogue of religious faiths, and Vivekananda, eloquently addressing its 7,000 attendees, argued for an end of fanaticism and a respectful recognition of all traditions of belief through universal tolerance. . .  Public Notice 3 explores the possibility of revisiting the historical speech as a site of contemplation, symbolically refracting it with threat codes devised by a government to deal with this terror-infected era of religious factionalism and fanaticism.

And with that, I will leave you with the text of the speech itself:

Historical or Contextual Information: SPEECH DELIVERED BY SWAMI VIVEKANANDA ON SEPTEMBER 11, 1893 AT THE FIRST WORLD’S PARLIAMENT OF RELIGIONS IN CHICAGO

My thanks, also, to some of the speakers on this platform who, referring to the delegates from the Orient, have told you that these men from far-off nations may well claim the honor of bearing to different lands the idea of toleration. I am proud to belong to a religion which has taught the world both tolerance and universal acceptance. We believe not only in universal toleration, but we accept all religions as true. I am proud to belong to a nation which has sheltered the persecuted and the refugees of all religions and all nations of the earth. I am proud to tell you that we have gathered in our bosom the purest remnant of the Israelites, who came to Southern India and took refuge with us in the very year in which their holy temple was shattered to pieces by Roman tyranny. I am proud to belong to the religion which has sheltered and is still fostering the remnant of the grand Zoroastrian nation. I will quote to you, brethren, a few lines from a hymn which I remember to have repeated from my earliest boyhood, which is every day repeated by millions of human beings: “As the different streams having their sources in different paths which men take through different tendencies, various though they appear, crooked or straight, all lead to Thee.”

The present convention, which is one of the most august assemblies ever held, is in itself a vindication, a declaration to the world of the wonderful doctrine preached in the Gita: “Whosoever comes to Me, through whatsoever form, I reach him; all men are struggling through paths which in the end lead to me.” Sectarianism, bigotry, and its horrible descendant, fanaticism, have long possessed this beautiful earth. They have filled the earth with violence, drenched it often and often with human blood, destroyed civilization and sent whole nations to despair. Had it not been for these horrible demons, human society would be far more advanced than it is now. But their time is come; and I fervently hope that the bell that tolled this morning in honor of this convention may be the death-knell of all fanaticism, of all persecutions with the sword or with the pen, and of all uncharitable feelings between persons wending their way to the same goal.

These words from 1893 resonate as strongly now, if not more so, than they did at the time. History does repeat. When does repetition become meaningful change? Or awareness? Not in 1893. Not in 2001. Not now. Swami Vivekananda’s words are as relevant to our world as they were to his. Read them. Think about them. And  pass them on.

“Be the change you want to see in the world.”  – Mahatma Ghandi
(Visited 1 times, 1 visits today)